Saved Styles are now updateable per artboard and include the 'popup' setting for the area.

The style options have had a new upgrade. Two new options have been added to allow updating styles per artboard. It was not always clear what changes on other artboards would be saved when updating a saved style, the new option to `Save this artboard` grants the ability to know for sure what will be saved. In similar fashion, the `Revert this artboard` option, also allows you to reset only the current artboard to the saved style, leaving any adjustments on other boards alone. 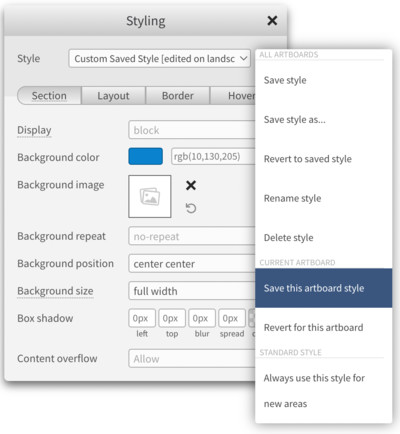 Besides these new options,  saving a preset style for a popup section now also stores the selected  display `as popup` value, making it easier to style complete areas as a popup.

​And much more since the last release!

Did you know we has some nice features added between the last mayor release and this one?

The 'Support' link in the editor now opens a popup where you can request support instead of directly opening your mail-client, and provides our support team with links to your page as well.

A new area has been added, allow users to add Adobe Animate exports to H5mag.

The animation timing options have been extended with a 'Animate after video' option. This allow you to trigger animations when a embed video has ended.

A new popup has been added asking users if they want to update the background on all artboards if those used the same image and the background in the Landscape artboard is changed without the 'Copy Styles' artboard transformation on.